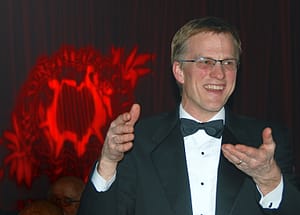 John Shankweiler became the Orpheus Club’s Conductor in 2004, bringing the skills of a superb tenor, a master teacher of voice ensemble performance, and a sensitive interpreter of the wide variety of musical genres encompassed by the club’s repertoire. While his specialty is early classical music (see below), he is an excellent jazz musician, as well as being fully in touch with cutting edge musical styles embraced by younger generations. The precision and clarity of his conducting technique is astounding. John is guiding OC singers through new territory, and the results are a thrilling experience for our Associate Members.

John’s jazz choir is designed to replicate the style of college a capella ensembles. His most select ensemble, The Silvertones, has given three concert tours in northern and southern Italy. They are currently preparing for their fourth concert tour which will be spent in Sicily in March, 2005. The Pennsylvania Music Educators’ Association has recognized The Silvertones as one of Pennsylvania’s finest small vocal ensembles in 1996, 2002 and 2004.

Under John’s direction, Strath Haven’s musical theater program is known throughout the county for executing highly professional and innovative productions. John greatly appreciates the works of Stephen Sondheim, and has produced and directed six of his shows. He raises the standard of high school theater every year by inspiring his students to take chances and delve deeply into themselves in search of the meaning behind the roles they play. This year, John and his students will perform Seussical written by Stephen Flaherty and Lynn Ahrens. Since the content of the show is so relevant to people of all ages, John is taking the experience a step further and will be involving students from the entire Wallingford Swarthmore School District in all that goes into the making of a musical.

As an ensemble performer, John specializes in Early Music. He tours, performs and records with the Waverly Consort, a six-voice early music ensemble which has appeared on CBS Sunday Morning and NPR’s St. Paul Sunday Morning. The current year’s tour schedule includes an appearance sponsored by the Philadelphia Chamber Music Society at St. Mark’s Church on December 17th, 2004. John and the Waverly Consort can be heard on CBS Masterworks, Angel, and EMI labels.

As a soloist, John has performed Handel’s Messiah and the Paul Winter Consort’s Missa Gaia at the Cathedral of St. John the Divine in New York City.