Want To Attend A Concert?

The Orpheus Club of Philadelphia performs for those who join us as “Associate Members”. Request an application to join us as a member today.

Learn More About Our Associate Membership

The Orpheus Club of Philadelphia

The Orpheus Club of Philadelphia’s sesquicentennial has arrived. As we continue to celebrate, this historic 151st season will feature an engaging, refreshing and joyful array of concerts and events truly not to be missed.

For all Associate Members and their guests, the Orpheus Club is making the most of this season with fantastic concerts, special events and access to unique experiences, including our highly anticipated 150th Anniversary Gala that occurred on Saturday, October 15.

P lease also mark your calendars for our Christmas Concert on Wednesday, December 14 at the Academy of Music, and look for additional information regarding our annual Twelfth Night Revels, which will return to our traditional January/February timeframe in early 2023. The Revels is one of the most popular events of the winter calendar, and the players will return to the OC stage this winter with afterglow parties to follow for all attendees. As a NEW benefit during the Revels, all Associate Members may directly reserve and pay for full dinner service at the Union League’s two restaurants: Café Meredith and the elegant 1862 by Martin Hamann, which has been described as the best restaurant in Philadelphia not open to the public. The Orpheus Club plans to provide transportation from the League to the Orpheus Club to Associate Members who take advantage of this special pre-show dining benefit.

Upcoming events include the annual OC Quartet Contest (moved to Spring 2023 – watch for details), our Midwinter Concerts in March at the Union League, and a return to the festive Devon Horse Show grounds for our Spring Concert in May. There will be more surprises and events in store throughout the season.

Orpheus events are open ONLY to Associate Members and their guests – do renew your membership today so that you can stay up-to-date with our activities and register for tickets and events online as soon as invitations launch. We look forward to celebrating with you this season!

“Behold, how good and how pleasant it is for brethren to dwell together in unity”– 133rd Psalm

Our 150th Anniversary Christmas Concert is again in Philadelphia’s classic 1857 Victorian Opera House venue where the Orpheus Club has performed since the 1880s. With the scenery from the Pennsylvania Ballet’s Nutcracker Suite, we will enjoy the spirit of the season together. There will be full Orpheus Choral seasonal pieces, small groups with some light hearted selections, and many pieces embellished by the talented Fairmount Brass Orchestra. As always, the evening will conclude with caroling by Associate Members and our combined on-stage forces.

Tickets to our concerts are not sold individually but are included, along with other benefits, in Orpheus Club Associate Membership.

The Orpheus Club email newsletter produced on a monthly(ish) basis while the club is in season October through May.
ALL THE NEWSLETTERS >

For Singing Members, our clubhouse is a place where we gather on Mondays to rehearse music. However, Associate Members have occasion to visit the clubhouse multiple times a year. From our pre-concert dinners to our after-concert parties, the clubhouse is the center of life for the Orpheus Club. 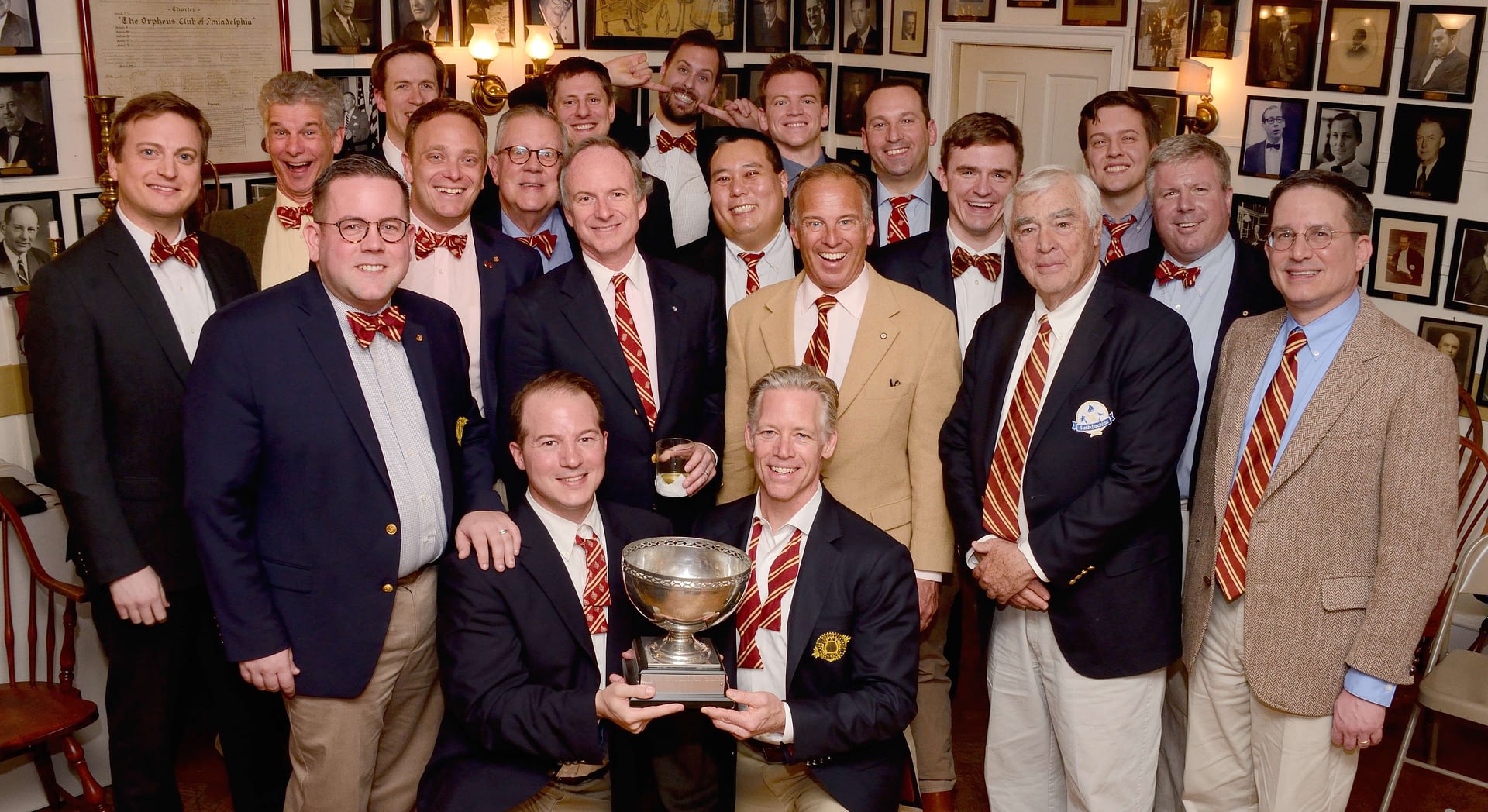 Founded in 1872, the Orpheus Club of Philadelphia is one of the longest-standing, independent, male choral societies in America. For nearly a century and a half, the Club has been a prominent fixture in the social and cultural life of the city of Philadelphia.

The Singing Membership consists of approximately eighty active members ranging in age from recent college graduates to men in their eighties and beyond.

The Club gives three formal concerts each year for its Associate Members and their guests in major Philadelphia venues, such as Verizon Hall at the Kimmel Center for the Performing Arts, the Academy of Music, and Lincoln Hall in the Union League of Philadelphia. Our repertoire spans classical, jazz and pop, with the Club often debuting new arrangements commissioned for its use. For four weeks each winter, at the Club’s colorful center city house, a select group of Singing Members presents to Singing and Associate Members, an all-original musical satire, the “Twelfth Night Revels”, featuring popular songs specially arranged, comic skits, a loose plot, and elaborate costumes.

Proud of its history, the Orpheus Club continues to thrive and looks eagerly ahead to a bright future.